Muhammadu Buhari, Nigeria’s incumbent president and candidate of the All Progressives Party, APC has won the 2019 presidential election, thereby re-elected for another term of four years.

In his acceptance speech, the president thanked Nigerians for re-electing him for the next four years. He also expressed his regret over the loss of lives during the elections in some parts of the country thereby urging the security operatives to step up efforts to protect voters in the forthcoming state-level elections on March 9.

“The new administration will intensify its efforts in security, restructuring the economy and fighting corruption. We have laid down the foundation and we are committed to seeing matters to the end. We will strive to strengthen our unity and inclusiveness so that no section or group will feel left behind or left out,” he said.

However, Atiku Abubakar has rejected the announced result of the election by the Independent National Electoral Commission (INEC), saying he would challenge it in court.

He said that it was obvious that there were deliberate malpractices in many states which negate the results announced.

“I am a democrat and there are democratic avenues available to present the truth to the nation and the watching world. Already, many international observers have given their verdicts, which corroborate our observations.

If I had lost in a free and fair election, I would have called the victor within seconds of my being aware of his victory to offer not just my congratulations, but my services to help unite Nigeria by being a bridge between the North and the South.

However, in my democratic struggles for the past three decades, I have never seen our democracy so debased as it was on Saturday, Feb. 23,” he said.

Consequently, INEC has given President Muhammadu Buhari and Vice-President Yemi Osinbajo certificates of return at the International Conference Centre (ICC), Abuja on Wednesday.

The certificate was presented to the President by the Returning Officer of the election, who is also the Chairman of INEC, Prof. Mahmood Yakubu. The presentation ceremony was observed by the wife of the President and his vice, respectively. 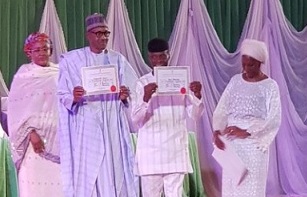 Speaking at the occasion, the president guaranteed Nigerians that they would soon see “a country moving to the `Next Level’ as the administration strengthens on its accomplishments.”

He also promised to continue to engage all parties as his administration would be operating an open government for the general progress of the country.