Nigerian citizens have been urged to familiarise themselves with the Freedom of Information Act (FOIA) in order to access public information and promote transparency in the country.

This was the outcome by experts at a tweet a-thon entitled “The Use of Freedom of Information Act (FOIA) by Media and Civil Society in the Quest for Transparency in Nigeria” organised by the International Press Centre (IPC) with support of Public Affairs Section, U.S. Consulate General, Lagos.

The FOIA , according to discussants at the forum can be used to curb corruption and entrench transparency in Nigeria if Nigerians including professionals make use of it as it was revealed that over 90 percent of public institutions violates Section 29 that mandates submission of Report on every February 1 with National Assembly, Economic and Financial Crime Commission (EFCC), Nigeria National Petroleum Corporation (NNPC) and security agencies being worst culprits.

According to the lead speaker, Olukayode Majekodunmi, Deputy Executive Director, Socio-Economic Rights and Accountability Project (SERAP):  “It is important for the citizens including the media to use the Act as the only way to make Nigerian government accountable is through the FOIA.”

He noted that to bring the Act to public domain, there is need for more public enlightenment on the usage of the Act and the judiciary should be more engaged to help in its implementation.

On the challenges of the Act, Majekodunmi said sanctions are not provided for non-compliant agencies. He therefore called for the review of the act saying “The Freedom of Information Act needs to be reviewed so that about 10 sections of the law which dwell on non-disclosure of information will be looked into.”

On his part, Kabir Garba, Editor, Art/Media, The Guardian newspaper said journalists have role to play if the Act must succeed. While declaring that there are still challenges facing the act five years after its passage, he stated that the civil society organisations have been more active while the media have been passive in the usage of the FOIA.

“The media was active in agitating for the law and now that it has been passed we seem to go to bed. If not for the CSOs the success recorded so far would not have been there. There is need for media and CSOs to collaborate as it was in the beginning of the struggle in 1993, which was sustained until the Bill was passed in 2011,” he said.

He declared that journalists should elevate discussion on FOiA: “So far, the war against corruption in Nigeria are still government led and not media led and is not good for democracy because they will give us what they want us to hear”, he noted.

In his speech, IPC Director, Lanre Arogundade said decision to focus on the use of the Freedom of Information Act by the media and the civil society was based on recent happenings in the country which shows that the journey towards transparency in Nigeria could take longer than anticipated despite the change of government a year ago.

“It is quite worrisome that a wall of darkness envelopes the true earnings of our elected leaders; be it in the legislature or the executive. It is equally worrisome that transactions in the oil sector are still shrouded in secrecy based on the under belly of wide spread corruption. It is “Also worrisome that there have been so many corruption allegations that have left members of the public wondering whether this cankerworm can actually be terminated or whether it is fighting back and defeating the nation.

Yet we have in place the three-year old FOI Act whose enactment was believed would pave the way to greater accountability and transparency by those who exercise public authority on behalf of the people,” he said. 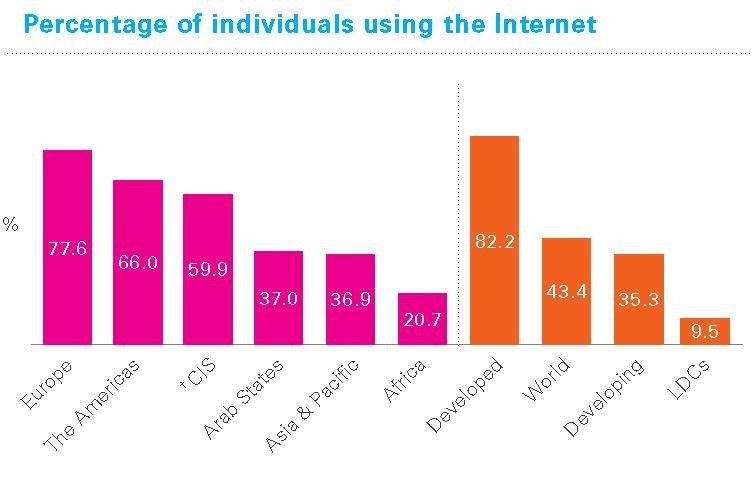 Research has revealed that Africa lags behind among comity of nations in the area of internet usage and access to internet.

According to a report by the World Economic Forum, percentage of individuals using the internet showed that Europe has 77.6 percent; America 66.0 percent; Arab States 37.0; Asia and Pacific 36.9 percent and Africa 20.9 percent.

Elsie Kanza, Head of Africa, World Economic Forum advocates that there is a need to fix the  digital poverty,  explaining that if Africans have access to affordable and fast internet, they would be able to create a rich future for the continent.

“Initiatives like this will only work if everyone has access to the internet in the first place. For too many of us, this critical first step is still lacking. In fact, according to figures from the International Telecommunications Union, just over 20% of Africans have internet access,” she said.

Ahead of the 2016 World Economic Forum on Africa, which takes place in Kigali on May 11-13, the Global Shapers, over 1,000 young people across 94 cities in Africa with the drive to make a contribution to their communities, are launching an #internet4all conversation.

Similarly, the Web We Want Foundation, as part of efforts toward increased internet access in Africa has scheduled programmes from May through June sensitising and advocating fast, safe and affordable internet access in Africa commencing with an action week between May 1-7 through activities to commemorate the International Worker’s Day, the World Press Freedom Day, the African World Heritage Day, the World Economic Forum on Africa and African Union Summit.

Activities include calling for more action on internet rights in Africa; Speaking out on internet, economy, jobs and rights; free speech and the internet should go hand in hand, among others.

Communities in Lagos state have cried out over the poor state of infrastructural development, calling on the state government to come to their rescue.

Speaking at a media parley organized by the International Press Centre, IPC, Lagos with the theme “Solution-driven Reporting of Poor Social/Living Conditions in Lagos Rural Communities” supported by the World Association for Christian Communications (WACC), the communities urged the state government to ease the suffering of the people in by addressing the deplorable state of amenities.

According to representatives of the communities from eight Local Government Areas  in Lagos, namely Offin/Oreta in Ikorodu, Otumara – Ilaje in Lagos Mainland, Bolaji Omupo in Somolu, Ituagan Waterside in Amuwo Odofin, Oko-Oba community in Orile/Agege, Peace Estate community, Command in Agbado/Oke-Odo, Erejuwa in Makoko and Obele Odan in Surulere; issues facing them include rehabilitating and completing abandoned road projects, provision of primary health care facilities and ensuring development of other social infrastructures to make life comfortable for them.

Prince Adeyeye Adebisi, a community leader from Offin/Oreta declared that he has witnessed the delivery of women on the popular motorcycle otherwise known as Okada as a result of bad road in the community.

“The major link road to our community is in very bad state. This road was the one constructed by former military governor, Gbolahan Mudasiru. We are on number 364 in road construction on government list. I’ve recorded women delivering on Okada. We spent over three million naira to dig drainage from Igbogbo. When it rains, you find yourself straining your ankles. Local government is not helping at all. When we manage to repair the road, they will come and video it in the night and take it to Alausa to collect money,” he said.

On his part, Jude Ojo, representative from Otumara said there is no public toilet and the area suffer from sanitation issues. “Government policies are politically driven instead of citizens driven. There is no consideration for the poor even in acquiring shops. We need road, town hall, the existing clinic has no drugs, no personnel; we are suffering in silence, we need help,” he said.

“There is no road, drainage in our area. The little project is by self effort. As a matter of urgency, we need primary healthcare; we use private hospitals and the bills are high. Drainage will also help us because the carnal is so close to us,” said Solomon Okosu, representative of Peace Estate in Command.

For John Ogunfuyi, Ituagan has no secondary school and no sufficient teachers in the primary school. “There is no electricity in our area, we need health centre. We want government to put these in place,” he said.

Moses Adewunmi, General Secretary, Boshua Community Development Council, Somolu said: “The canal project in our area is uncompleted; it has stayed for almost two years and has paralyzed the entire community. The road construction in Bolaji Omupo was abandoned and hoodlums now come and steal people’s property due to this abandoned project.”